The federal government today released the results of its public consultation on the legalization of pot and revealed its proposals for how recreational cannabis will be packaged and regulated.

“Over the past two years we have consulted extensively on our plans to legalize, regulate and restrict access to cannabis,” MP Bill Blair, the federal government’s point man on pot legalization, told reporters Monday in the foyer of the House of Commons.

‘We think this an appropriate and prudent level to allow that small-scale industry to develop,’ says the government’s pot point person on micro-grows. 6:53

“What we’ve heard from Canadians is clear: these regulations must protect the health and safety of Canadians, particularly our youth, while at the same time enabling a diverse, competitive and legal industry comprising both large and small players that can displace the existing illicit market for cannabis.”

“Its very important for us to ensure the safety features are there in place,” Health Minister Ginette Petitpas Taylor told reporters Monday. “We want to make sure that it’s child-proof and that it’s tamper-evident.”

The Trudeau government’s proposals include restrictions on the colour of packaging and the depiction of branding, requirements for mandatory warning labels and a ban on packaging designed to appeal to young people.

The regulations state cannabis packaging can’t display florescent or metallic colours and the colours that are used must contrast with those of the official cannabis symbol — meant to warn the consumer about the presence of marijuana’s active ingredients — and the yellow background of the Health Canada warnings.

The proposed restrictions also stipulate that only one additional branding element – aside from the brand name itself – can be displayed on the tamper-proof and child-proof packaging. If that additional element is a slogan, the lettering can’t be bigger than the font of the health warning, while any logo must be the same size as, or smaller than, the standardized cannabis symbol.

The federal government is also banning inserts inside the cannabis packages themselves — a rule meant to prevent producers and processors from getting around the limits on branding and marketing. 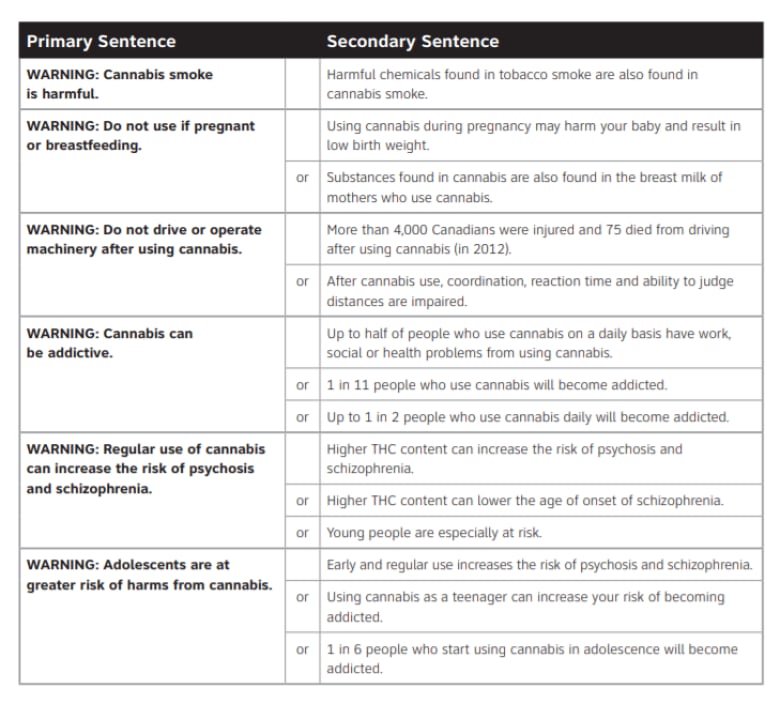 A list of the 14 proposed health warnings that must appear on packages of cannabis. Companies will be required to rotate the messages across their product lines over the course of a given year. (Health Canada)

The proposed regulations — which could still change as the Cannabis Act works its way though Parliament — require producers to include one of 14 mandatory health warnings on each package. Producers and/or cultivators would be required to make sure all messages appear on their products by rotating the various warnings “on each package of each brand name with equal frequency in a calendar year.”

“We have heard loud and clear from provinces and territories and also from stakeholders that they need to have this information regarding packaging as soon as possible,” said Petitpas Taylor.

“So we are very comfortable with the information that has been brought forward with respect to the specifics of the labelling and the packaging and the warning sign that is going to be on all cannabis types of products.”

Those Health Canada labels including warnings about the risks regarding pregnancy, addiction, mental health, youth, and operating machinery or driving while under the influence of cannabis.

“We also want to ensure that consumers are aware of the THC and the CBD levels that will be included in the cannabis product that they may choose to purchase. That’s the type of information that we feel is very, very important to Canadians,” said Petitpas Taylor. 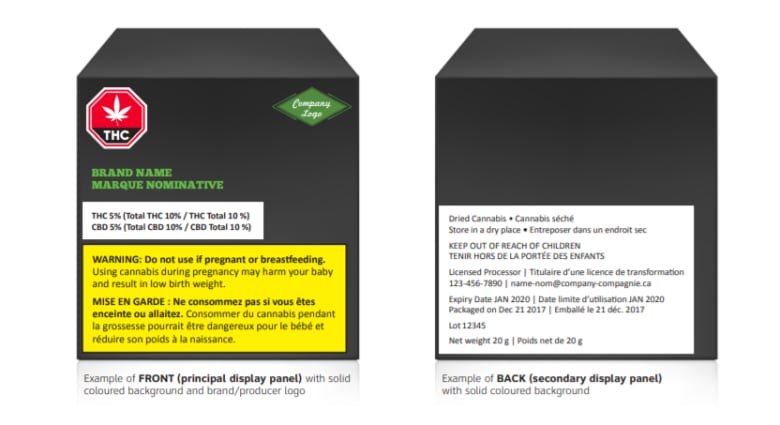 An example of the suggested packaging proposed by Health Canada including the warning label, dosage information and the standardized cannabis symbol. (Health Canada)

The proposed rules also outline how the federal government would regulate micro-cultivators and micro-processors.

A micro-cultivator — someone growing pot on a small, boutique-like scale — would be restricted to a “plant canopy area” of no more than 200 square meters.

Micro-processors would not be able to process any more than 600 kilograms of dried weed annually — which Health Canada says is about the total maximum production of a micro-producer.

The micro-cultivation and processing limits, Health Canada said, were set to allow “small-scale growers and processors in the legal cannabis industry” to make their businesses viable without making them so small that the rules would drive producers into the black market to survive.

David Robinson of the Craft Cannabis Association of B.C. said the size restrictions do not provide much room for small businesses to grow.

“It’s just really going to limit the scale that the micro-producers can contribute to the marketplace,” said Robinson. “Micro-producers represent the folks who have built this industry. They are no-doubt the producers of the highest quality.”

The federal government reached out to Canadians through a series of in-person roundtables and online web-based discussions and received additional feedback through online and written submissions.

Four specific topics drew a large degree of interest from those who participated in the nationwide consultation.

Growing outdoors on a commercial scale was widely supported, according to the government, although some concerns persisted about the risk of theft and the need to mitigate smell during the flowering season. 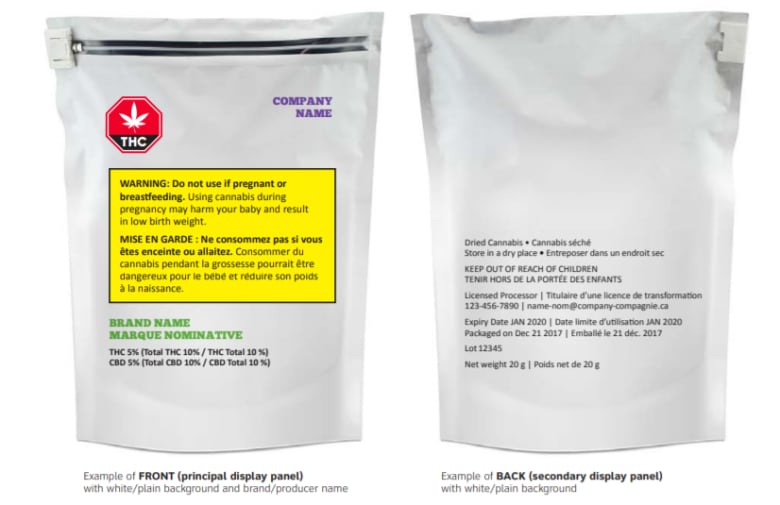 Each package would have to be tamper evident and child resistant such as this plastic bag package included in Health Canada’s proposed regulations document. (Health Canada)

Many of the respondents suggested that because there are currently thousands of different strains of cannabis being sold in Canada illegally, that to remain competitive legal growers would need access to plant genetics to expand their offering. The government responded by saying that “consideration is being given to how the regulations could enable the introduction of new plant genetics into the legal system.”

Because the consultation paper did not contain any restrictions on how many licenses a micro-processor or micro-cultivator could hold at a single location, many expressed concerns that someone could skirt large-scale production rules by holding several micro-permits at once. In response Health Canada is considering restricting the number of licenses a single location can legally hold.

The government also heard that Canadians worry that current financial regulations would make it easy for criminal organizations to craft complex financial structures to invest in the legal cannabis industry. The federal government said it will look into ways to increase financial transparency for producers and cultivators.